A dish made of chicken meat, ideally from broiler chickens which are coated with flour, dipped in seasonings, and then deep-fried or, sometimes, pressure fried. They are cooked until golden brown and crispy.

Fried chicken is a main dish made of chicken pieces, typically from broiler chicken, battered or floured to make a crispy crust when pan fried, deep fried, or broasted. What makes fried chicken different from other fried dishes of chicken is the way the meat is cut to the joints, and the skin and bones are left intact.

“Fritters,” which were popular during the Middle Age, is the first dish known to have been deep fried in fat. However, Europeans (specifically the Scotts) were the first to deep fry chicken without any seasoning. Meanwhile, the West Africans introduced a more flavorful seasoned fried chicken. Today, the crispy well-seasoned skin of fried chicken, a combination of Scottish-African cuisine, is the hallmark of the best fried chicken. 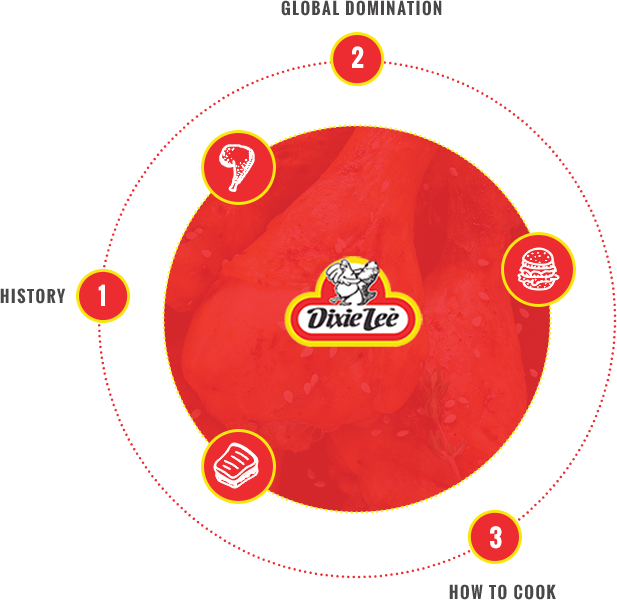 Did you know that your favorite “American comfort food” originated from a Scottish-African cuisine? That is right! Americans are not the brilliant minds behind the all-time favorite, perfect-for-all-season FRIED CHICKEN. Who then invented this world’s bucket-filler tasty madness?

This might sound disappointing but Americans were not the first race to creatively think that dipping chicken pieces in a hot pan would lead to a major food invention. As far back as the Middle Age, the Europeans have a documented history of frying chicken meat. However, it was the Scottish people who specifically chose to “deep fry” chicken in fat, which are eaten without any seasoning or sauce, whatsoever. This means the Americans can safely assume that their fried chicken, which they hold so dearly today is fairly similar to that of the Scots of the medieval period. When slave trade was at its peak, many Africans were brought across the borders and were cooks for many southern people. They incorporated seasonings and spices which were missing in the medieval Scottish cuisine, thus enriching the flavors of the fried chicken you have as a common staple today. Since then, fried chicken continues to be among the top choices for “Sunday dinner.” During special holidays such as the Independence Day and other events, fried chicken will always have a special place on the table.

The evolution of fried chicken did not end with the Scots, the Europeans, the Americans, nor the Africans. With modern cooking technology and the mass production of chicken, it has become easier and cheaper to prepare this dish, making it a staple in the fast-food industry and overseas. As many countries from all around the globe have tasted the popular American fried chicken, they have decided to put a touch of their own culture on the dish. Here is fried chicken from all around the globe:

The Japanese version involves marinating morsels of chicken in soy sauce and other famous Japanese seasonings. They are deep fried in potato starch, thus giving the fried chicken a slight tempura-like crunch.

Preparation: Japanese fried chicken, known as “karaage,” is made by cutting bite-size chicken pieces which are then marinated in soy sauce and sake with ginger and garlic.The Japanese version is coated with potato starch which turns into very thin shell enclosing a juicy and tasty bite of chicken.

Sides: Karaage is best served with easy-to-prepare shredded cabbage and carrot salad or cucumber sunomono (su means vinegar; sunomono refers to any appetizer or side dish dressed with vinegar)

There are two famous varieties of Korean fried chicken (also called chikin (치킨, from the English “chicken”), which include the huraideu-chikin and spicy yangnyeom-chikin. In South Korea, fried chicken is served as an appetizer, a main course, after-meal snack, or anju (food that is served and eaten with drinks).

Preparation: The Korean fried chicken is crunchier and less greasy compared to the American style fried chicken. What makes their fried chicken dish unique is the fact that they are cooked twice. They use small- or medium-sized chicken cut into small pieces and are seasoned with salt, sugar, and other spices before being fried. After frying, the chicken pieces are manually painted with special Korean sauce using a brush to evenly coat each piece.

Sides: Pickled radish cubes and cucumber salad can be a flavorful and light accompaniment to the Korean-style fried chicken.

Commonly referred to as “crispy fried chicken,” this dish is a standard in the Cantonese cuisine from southern Hong Kong and China. Traditionally, they only eat fried chicken at night, and this is also a favorite dish during Chinese and Asian weddings.

Preparation: The Cantonese version of fried chicken is cooked well until the skin is super crispy while the white meat is soft and juicy. This is done by poaching the chicken in water with spices such as pepper, ginger, and scallions. After that, the chicken pieces are dried then coated with syrup made of vinegar and sugar before frying.

Preparation: Make the marinating paste by blending red onion, turmeric, garlic, ginger, coriander seeds, galangal, and olive oil. Then add salt, pepper, and chicken powder to add more flavors. Marinate the chicken pieces in the paste for 2 hours, and turn each piece from time to time. Strain to get rid of any marinade drips. Deep fry or pan fry the chicken and cook in the oven for 30 minutes at 180 degrees.

Sides: Ayam goreng is perfect when served with spicy sambal or kecap manis.

Fried chicken is not only the staple of American households but also of Taiwanese street carts. With salt, pepper, and chili powder on top, the Taiwanese fried chicken will surely give you that extra hot and flavorful experience.

Preparation: Generally, to make the the Taiwanese fried chicken, leg or thigh chicken meat are diced and marinated in soy sauce, rice wine, garlic spread, five-spice powder, sugar, and spice powder for at least one hour. After marinating, the diced chicken pieces are dipped in egg then dredged in sweet potato starch or flour. The fat needs to be heated up to 180 ℃ before adding the chicken. More pepper can be added before serving.

There are so many ways to cook fried chicken. May it be the Southern or Japanese version, there are basic steps you can follow to the perfect crispy golden brown dish.

To increase the tenderness and allow great flavors to be absorbed by the meat, marinate or soak the chicken pieces in a brine or buttermilk for at at least 30 minutes or overnight.

After the coating process, let the coating dry for several minutes. Air drying the chicken for 20 to 30 minutes will create a firmer and crispier crust when fried.

This is the step where you have more freedom. You can be basic with salt and pepper or you can be creative by mixing different seasonings until you find the taste that truly kicks. The flour used for the coating can also be seasoned or just season the meat itself. Paprika can be a great seasoning that will not only add flavor, but color too.

The secret to making the ultimate comfort food is not the seasoning nor the kind of chicken meat you have. It is the frying process. Properly deep-fried chicken is crispy on the outside and juicy on the inside. The secret is keeping the oil very hot (375 degrees Fahrenheit). This temperature will keep the water in the chicken at a boiling point, producing steam that blocks the oil from the meat. Thus, the chicken is crispy but not greasy.

There are basically three techniques in frying chicken. You can pan fry, deep fry, or broast.

When pan frying, you would only need a sturdy frying pan and enough amount of fat that will not totally immerse the chicken meat. First, the fat is heated until the temperature is hot enough to cover the chicken pieces. When all meat are added into to the heated fat, the temperature must  be reduced. You can turn the chicken often or you can either wait and turn when necessary. When all the meat are close to being done, the temperature should be increased until the desired crisp and color are achieved. If you want to make Chicken Maryland, you only need to place the pan with fat and chicken pieces in the oven, where the majority of cooking happens.

As the name suggests, deep frying requires, of course, a deep fryer or other frying device where the chicken pieces will be completely immersed in hot fat. When preparing the chicken, you can batter the meat with flour, liquid, and seasonings to add more flavor. You may also use egg, milk, and leavening for the batter. Heat the fat in the deep frying device at the desired temperature, then add the chicken pieces and maintain the same temperature throughout the cooking process.

This is a method of frying that combines boiling and roasting. When broasting chicken, a pressure cooker is used to accelerate the process of cooking. Unlike the two processes described above, lower temperature is needed when broasting since the moist inside the chicken becomes the steam that increases the pressure in the cooker. That same steam allows the chicken to be thoroughly cooked and moist inside while maintaining the crispy coating. The chicken is floured or battered and then placed in hot fat. When the lid is closed, the chicken pieces are fried under pressure, in a just short amount of time.

Fried chicken may come in different sizes, shapes, and flavors, but when it is good, it is always good. Taking a bite into the craggy crisp and flavorful skin that gives way to the moist and tender white meat inside is one of the greatest pleasures that only fried chicken can give you!

Craving for a flavorful Fried Chicken experience but no time to brine and fry? Well, Dixie Lee is the place you want to be right now!